You can click on the button above to play recordings from our club nights.

It has been a while since we were able to add anything on this page due to lockdown but while restricted to holding club nights on line we had a fancy dress night on 17th June 2020 and this was the result:-

Our annual event for Children In Need at Much Wenlock was another resounding success. The people of the town were forming an appreciative audience in the High street as the strummers played their hearts out. Once the collection has been totalled up, It will be posted on here. (Pictures courtesy of Terry Cottam and video clip by Denise Kirk)

On Wednesday 25th September 2019 Mike Dickens visited the Bridgnorth Ukulele Club on behalf of the Wyre Forest Talking Newspaper. An organisation, which produces a regular newspaper for people who have sight impairment and would find a printed paper  impractical. He spent the evening listening to the club members performing and was able to record some of the proceedings. He was also able to interview some of the members.

He described the atmosphere as “Scintillating”

Here are the results:-

For all lovers of the mellifluous tones of a turbocharged V8 accompanied by the gut-wrenching thunder of a dozen+ ukuleles: come along to Bridgnorth High Street on Sunday 1st September and bear witness to the creation of a new kind of music 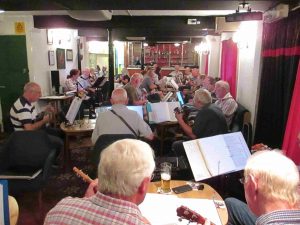 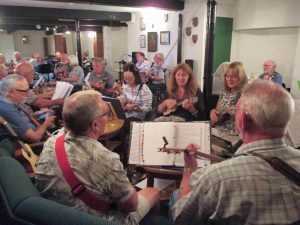 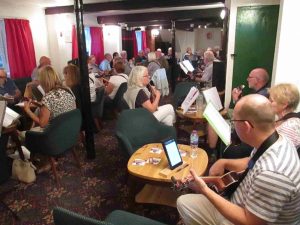 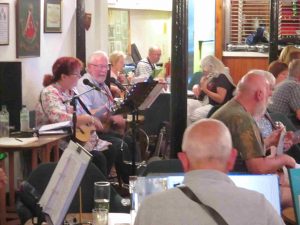 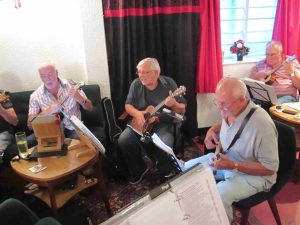 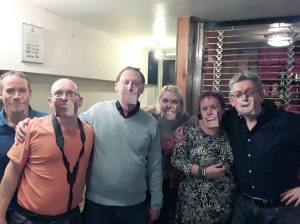 We have a winner….

of the Spooky Homepage Competition. Kris spotted it as of 15:18 this afternoon! People are moving around in the houses in the picture above. Each time you refresh the page (either via your browser or clicking the Home button) different lights go on an off in different rooms in the houses. There’s even a shadowy figure who sometimes appears in one of the windows. A set of strings will be coming your way Kris.